Bringing the Porsche Community together – a vibrant celebration of car culture, of Porsche cars, old and new, of competition, creativity and ambition spanning over 70 years

Porsche Cars North America (PCNA) will host the first ever Sportscar Together Festival between September 10–12, at the world-renowned Indianapolis Motor Speedway (IMS) in Speedway, Indiana.

The spectacular three-day festival combines a celebration of car culture, of Porsche sports cars in all of their forms, spanning seven decades with a packed schedule of motorsport action supported by themed, interactive displays of Porsche cars from the past, present and a little way into the future with the very latest new models making their public debut. 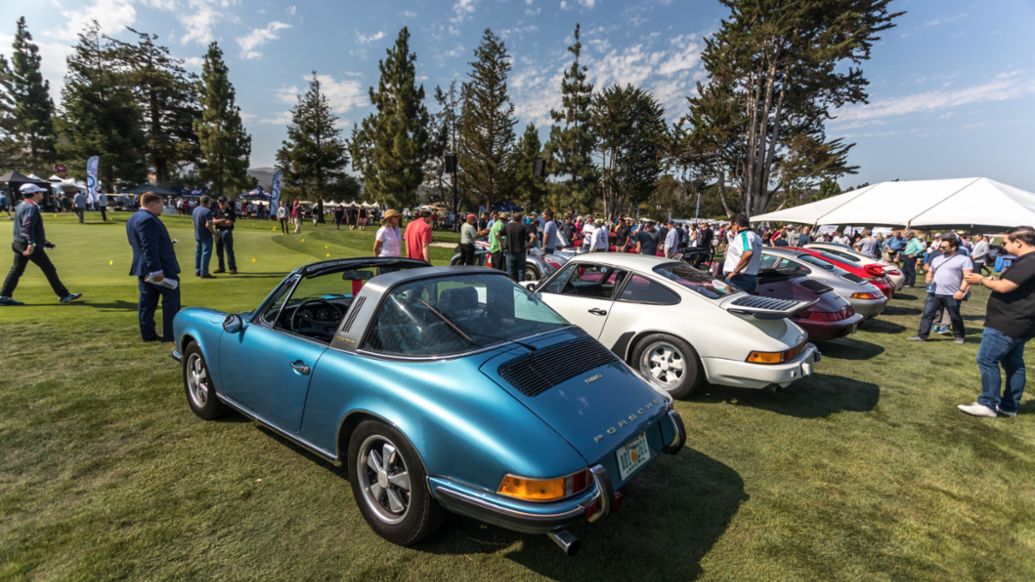 “Car culture is a sense of family, of warmth and of shared passions and dreams – and this is at the core of the Sportscar Together Festival,” said Kjell Gruner, President and CEO of Porsche Cars North America. “It’ll be a living, breathing and exhilarating celebration of not just cars created by Porsche, but of car culture itself – for all ages. We look forward to welcoming everyone who shares this passion – whether they’re a Porsche owner or not – to a unique weekend of action, on and off the track.”

Taking place at the home of the world-famous Indianapolis 500 Mile Race, the Indianapolis Motor Speedway serves as the perfect backdrop to the Festival, with the relentless on-track action being supported by chances to learn more about the creation of the GT model lines, from the people responsible for them, as well as Porsche’s commitment to supporting its past, through a Classic Restoration competition.

Fittingly, at the core of the festival is the race action. Underlining the core principle that motorsport benefits the breed, the festival will uniquely host three major Porsche one-make race series at the “Racing Capital of the World.” The three series represent Porsche motorsports ‘pyramid’ – from the cost-effective entry point into club motorsport through the Porsche Sprint Challenge North America by Yokohama up to the purpose-built racers in the form of the Carrera Cup North America. Sportscar Together Festival is the first and only event thus far that brings these different series together in one place.

The Porsche Club of America will be a high profile participant at the festival with the Club Racing Program taking center stage as well as themed car displays and concours events.

The 2.439-mile, 14-turn road course of the legendary facility – incorporating parts of the oval made famous by the Indianapolis 500 – will be used for all on-track sessions. The action won’t just be limited to race cars, with the chance for attendees to get involved through an autocross experience in the new 718 Boxster GTS 4.0 as well as a special off-road driving activity set aside to test the limits of the Cayenne.

Tickets for the Festival are available via the following website: ims.com/Porsche 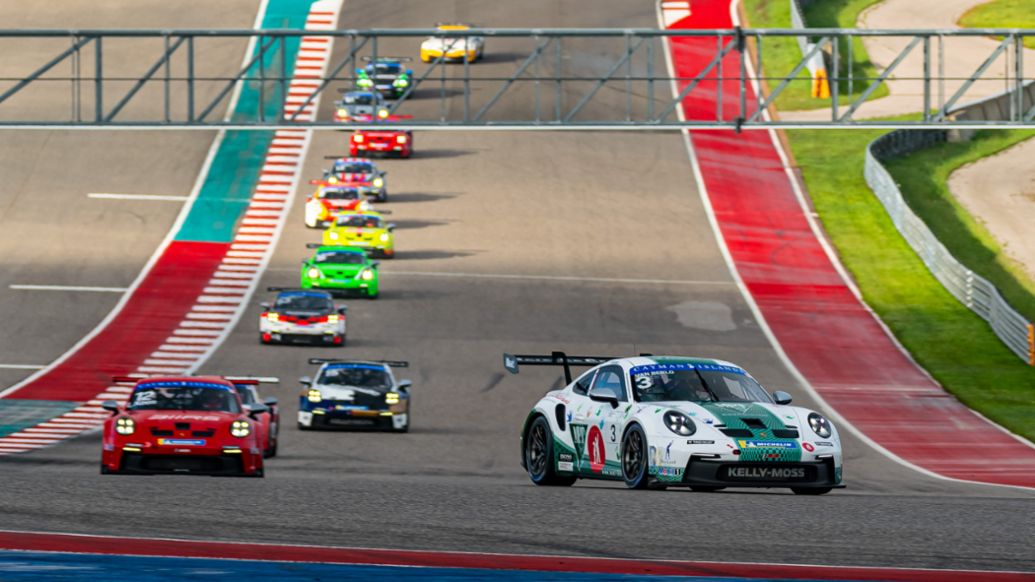 The racing action in detail

In addition to championship rounds of the Porsche Carrera Cup North America Presented by the Cayman Islands, the Porsche Sprint Challenge North America by Yokohama and Porsche Club of America (PCA) Clubsport racing events, the weekend will be a showcase of how learnings on track, made it to the road.

The Porsche Club of America (PCA) will be heavily involved in the Porsche Sportscar Together Festival. In addition to off-track activities, PCA Club Racing/Clubsport groups will compete on-track. Specific run groups representing the entry-level of the Porsche Motorsport Pyramid North America will be announced in the coming weeks.

The three race series represent the racing culture of Porsche and its purpose-built structure to move drivers, teams and marketing partners up the ranks of motorsport, known as the Porsche Motorsport Pyramid North America. From novice instruction and track days with Porsche road cars through to full participation in open competition professional racing around the world with Porsche purpose-built racing machines, this path provides the path, appropriate car and support throughout the journey. The Porsche Carrera Cup North America Presented by the Cayman Islands is the highest one-make level of the Pyramid, after which drivers graduate to open competition against other brands and less stringent rules.

A day to celebrate sports car fascination. A feeling that unites sports car enthusiasts around the world – and forges unforgettable moments. To many, Porsche is more than just a sports car, it unites and transcends borders. It unleashes emotions and leaves a trail of shared experiences and memories.

On 8 June 1948, the first vehicle was registered under the name of Porsche. 70 years later in 2018, we took the opportunity to launch the world’s first dedicated day to celebrate sports car fascination: Sportscar Together Day.

This year, let us celebrate once again. Whether you own a sports car or not, share your excitement with other sports car enthusiasts and experience sports car fascination – together.

Everything at Porsche has always revolved around fascination sports car. We want to share this feeling with you and the whole world. Time and time again. #SportscarTogether

In the Porsche vernacular, Luftgekühlt represents all the air-cooled cars in the manufacturer’s history, from the Pre-A 356 through the 993 model line, which ended in 1998.

The Luftgekühlt brand is the brainchild of two-time Le Mans class winner Patrick Long and noted Southern California creative director Howie Idelson. A true Porsche happening, Luftgekühlt is an experiential car culture event centered around a tightly curated list of historically significant or interesting cars, both race and street. There's no set formula for our events, but we're excited by cool venues, fun people, and creative expression, so you can bet those elements will always be in our recipe. We like coming up with wild ideas that celebrate the passion we have for all things air-cooled, and we love collaborating with like-minded people and brands.

Porsche Clubs organise a wide range of motorsport activities around the world. Each one provides the perfect environment in which members can explore the potential of their Porsche. Events are held under controlled conditions, with some requiring a full racing licence.

This genuine passion for sports car racing is something we share at Porsche. Which is why we're committed to developing our relationship with all Porsche Clubs, as well as with all Porsche drivers and teams.

The Porsche Classic Clubs provide an opportunity for enthusiastic drivers of classic Porsche vehicles to meet. They provide their members with the best possible platform to exchange their experiences regarding the care and maintenance of historic vehicles.

These clubs organise many excursions such as Classic Rallies and other events surrounding classic Porschevehicles.

One highlight in the Classic scene is the annual International 356 Meeting hosted by a different country every year. You could also travel to the Vintage Grand Prix at the Nürburgring. Or enjoy the historic 24 Hours of Le Mans Classic which pits vintage cars against one another that already participated in the great race back in their heyday.

The Porsche Parade staged by the Porsche Club of America (PCA) is one of the most important Porscheevents held annually in the USA and is attended by club members, guests and sponsors.

For one week every year, a city in the USA becomes the Porsche capital. This gives participants the opportunity to visit a different part of the country each year and to spend time with other Porsche enthusiasts and club friends. Here, participants can indulge their passion and enjoy autocross competitions, rallies, the vehicles exhibited, as well as numerous information events all about Porsche. The Parade is attended by approximately 2,000 people, most of whom travel there in a lovely, beloved Porsche vehicle.

Driving is only part of it. Since 1960, PCA-LA members have rallied around their Porsches from Mulholland Drive to as far afield as Bryce Canyon. But PCA-LA is as much about the people as it is the Porsches. We’re from all walks of life. We’re friends. And we’re supporters of one another.

The Techno Classica in Essen, Germany, is an internationally renowned motor show for vintage, classic and prestige cars, motor sports, motorcycles, spare parts and restoration. The world-famous trade-show is therefore the international meeting point for classic cars and vintage enthusiasts.

At the Techno Classica, over 1,200 exhibitors from many nations present first-class vintage cars, more recent classics and many vehicles in the high-price segment.

From 23 to 27 March 2022, the Porsche Classic team will once again be present at one of the world's largest motor shows for classic cars in Essen and is looking forward to seeing you there.

From February 27 to March 01, 2020, Porsche Classic was once again present at the Retro Classics in Stuttgart, one of the most important vintage car shows.

The racing atmosphere of days gone by can be experienced live and authentically at the “Le Mans Classic”. The drivers, who compete classified in a series of six “plateaus” (classes) and by model year up to 1980, start according to the classic Le Mans rules: At the starting signal, the drivers sprint to their cars, start the engine and speed off. Each starting line-up is called to the start three times within the 24 hours, each of the vintage racing classics is on the track for a good two hours. The equipment is not spared, however. The fastest of the racing machines reach speeds of over 300 km/h on the famous Hunaudières straights.

probably the most popular meeting for pre-1966 race cars, has been taking place at the Goodwood Motor Circuit in Southern England since 1998. Year after year it offers visitors a very special experience, a trip into the motor sporting past of the 1940s, 50s and 60s. Over 500 classic racing cars from the most famous manufacturers throughout Europe and the world compete in numerous classes and merely taking part is an honour for any driver. Driving in a Goodwood race is the racing world's equivalent of being knighted, since in order to do so it is essential to have received a personal invitation from the Duke of Richmond, who organises the event. It should therefore come as no surprise that many famous racing drivers from the glory days of motor sport attend the event.